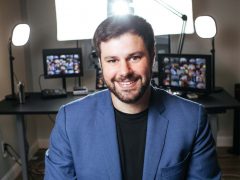 Harrison Kramer is a world class professional magician for hire in New York City and one of the most experienced interactive Zoom entertainers in the world. His virtual magic shows have been booked by Google, Apple, Amazon, Microsoft, and Facebook as well as hundreds of other tech giants, finance firms, and Fortune 500 companies from all over the globe. In March of 2020 Harrison found virtual magic out of temporary necessity, but it quickly spiraled into something much bigger. Harrison began to see virtual magic as a powerful tool for bringing people together and creating meaningful shared experiences when physical proximity was impossible. It is his belief that this new medium is still vastly unexplored and holds the keys to bring more inclusion, equality, and joy to the world. Today Harrison has a professional broadcast studio in his home and specializes primarily in interactive video conferencing magic for corporate events and charitable initiatives all over the world. Outside of performing, Harrison loves spending time with his wife and daughter, focusing on his humanitarian work, photography, and Tacos.